If you have a special occasion that requires dancing, our ten piece Lust Life Latin Band will keep your crowd hopping all night. South American music, Salsa and Cuban Son, Mambo, Merengue, Cumbia and Cha Cha rhythms will please the dancers. This Band is comprised of some of the finest Latin Musicians in Canada. We specialize in playing the right music to keep people dancing for any party. 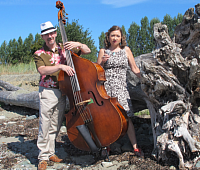 A STYLE AND VOICE ALL HER OWN. ;  Anna Lyman grew up in (Detroit) Motown! and was influenced by stars like Stevie Wonder, and Ray Charles, but a perk of being Latin-American is that as a young child, she was exposed to the Great Brazilian Gurus, A.C. Jobim and Sergio Mendes. A love of Jazz and Brass came from being exposed to Ramsey Lewis, and Henry Mancini, as well as Jazz Musicals in Old Movies.   She has been described by renowned Jazz Drummer, Keith Copeland as a "tremendous talent". Keith also said: There are a lot of singers out there... Some of them have phrasing, some of them have tone, some can swing,   YOU HAVE IT ALL! (Keith Copeland, 2003). Juno Award winner Rick Kilburn described her vocal ability as "just like the old masters". Anna's lush vocals go straight to the heart whether she swings or broods over a ballad.

Kumbia Latin Band -  For over 25 years Kumbia was the top Latin Band in Victoria offering South American dance rhythms and tight vocal harmonies.  One of Victoria's most sought after bands, they are now available again on a limited basis, after a 5 years creative hiatus.  Latin Music at it's best.

Acoustic Guitar Duo featuring Al and Mike play real music that is felt in the bones and the soul and played freely with engagement and expression. They play the music like a conversation between two guitars. Perfect for a soft evening of great music.